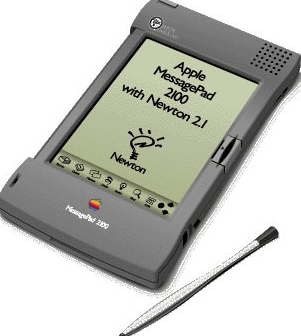 During the 1980’s companies as Pencept, Communications Intelligence Corporation, and Linus that offered products that today we can call rightful predecessors of tablets. The Early tablet computer is an example of pen computing technology. However, it is necessary to mention that the development of tablets has deep historical roots, such as 1915’s patent for a system that recognized handwritten characters by analyzing the handwriting motion.

In 1986, a startup Hindsight developed the Letterbug, an 8086-based tablet computer with its purpose for the educational market. Prototypes of the products were presented at trade shows in New England in 1987. However, products never came out on the market.

A year later, Apple Computer started to work on its tablet project. This project originally included the release of three devices of different sizes. However, the company only presented only one in 1993, the smallest Apple Newton. It was the tablet with 6-inch screen and 800 grams weight, which utilized the company’s system Newton OS.

1987 was significant because of another reason as well. That year Apple Computer sponsored a contest for the best design of “the personal computer of the year 2000”. The winning team the University of Illinois at Urbana–Champaign offered a prototype named TABLET.

In 1989, the GRIDPad tablet was presented, and in 1991, AT&T released the first commercially available tablet EO Personal Communicator.The Compaq released Compaq Concerto in 1993 which had a modified version of MS-DOS 6.2 and Windows 3.1, with pen-entry as well as Wacom compatibility.

The first concept for a tablet with a color display appeared in 1994, and it was offered by the media company Knight Ridder (acquired by The McClatchy Company). However, the company was not able to create it as a commercial product because of weight and energy consumption.

The first internet-based tablet was presented by the Webbook Company in 1996. It was referred to as a Web Surfboard, with Java and utilize an RISC processor. The model was never in production.
Also in 1996, the company Palm, Inc. offered the first of the touch based devices, Palm OS based PalmPilot touch and stylus based PDA, incorporating a Motorola Dragonball (68000) CPU.
The same year, Fujitsu released the Stylistic 1000 tablet format PC, with Microsoft Windows 95, on a 100 MHz AMD486 DX4 CPU, with 8 MB RAM and stylus input. It offered the opportunity of connecting a conventional Keyboard and mouse.

In 1999, StrongARM based touch screen tablet under the name WebPAD was announced by Intel. It was later re-branded as the “Intel Web Tablet.” However, in April 2000, Microsoft launched the Pocket PC 2000. It was also incorporated touch technology and Windows CE 3.0 operating system.

Tablet design and production for a long time were problematic at least. There were many issues concerning the size of the product, or the weight, as well as operation and power matters.

In 2002, the first tablet PCs designed to the Microsoft Tablet PC specification was released. They were designed to run Windows XP Tablet PC Edition, which was the Tablet PC version of Windows XP.

owever, Tablet PCs failed to attract and engage consumers since the previous devices were too heavy to hold in one hand for a longer period, also the specific software features which were designed to help promote the functionality of the tablet such as finger and virtual keyboard supports were not available in all contexts. Finally, there were not enough applications for the platform.

In 2003, the first rugged tablet was introduced. It was a VisionPlate tablet by Hitachi that was used as a point-of-sale device. A Debian GNU/Linux-based graphical user environment called Maemo (later rebranded MeeGo) was also presented. It was designed for the Nokia Internet Tablet devices such as 770, N800, N810 & N900.

WebOS which was initially developed by Palm, Inc. was purchased by HP to be incorporated as the operating system for the Linux kernel. Besides, webOS platform was developed and used in multiple products, including smartphones, tablet PCs, and printers. However, HP announced plans that the webOS would run within the Microsoft Windows operating system by the end of 2011.

The tablet computer market met certain changes once Apple introduced the iPad device in 2010. The touch interface of the iPad is considered a milestone in the history of the development of the tablets, even though it places restrictions on the owner when it comes to installing software. However, this milestone defined the tablet computer as a new class of portable device, making it different from a laptop PC. A WiFi-only model was released in April 2010, while a WiFi+3G model was presented a month later. The iPad offered options such as web browsing, email, photos, videos, and e-reading, even though full-featured, Microsoft Office-compatible software. In March 2011, Apple announced that around 15 million iPads had been sold in three fiscal quarters of 2010, which was the double of the number that was predicted by IDC.